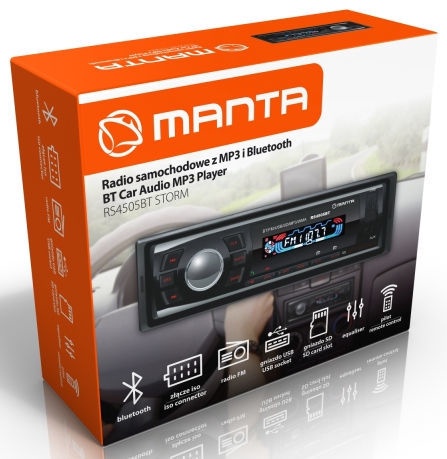 
Thanks to the use of Bluetooth, you can pair the radio with a smartphone and listen to music without physically connecting your smartphone to the radio. In addition, the Bluetooth function allows the use of the STORM RS4505BT radio as a hands-free set. This solution is known from high-end cars, where the built-in speaker is operated by the car's audio system. A similar effect can be obtained by using the STORM RS4505BT radio.

RS4505BT STORM is not just a radio, it is also an excellent MP3 player. Thanks to the SD slot and the USB connector, you can play music from popular removable media. The AUX IN jack allows you to connect any other signal source. In the set, the user receives an infrared remote control, thanks to which the RS4505BT STORM radio functions can still be conveniently operated. To facilitate the installation of the device in the car, the RS4505BT STORM radio was equipped with an ISO bar. Such a solution means that the user does not need to connect the cables on their own during assembly, but only adjust the appropriate ISO block in which all necessary connections are located.